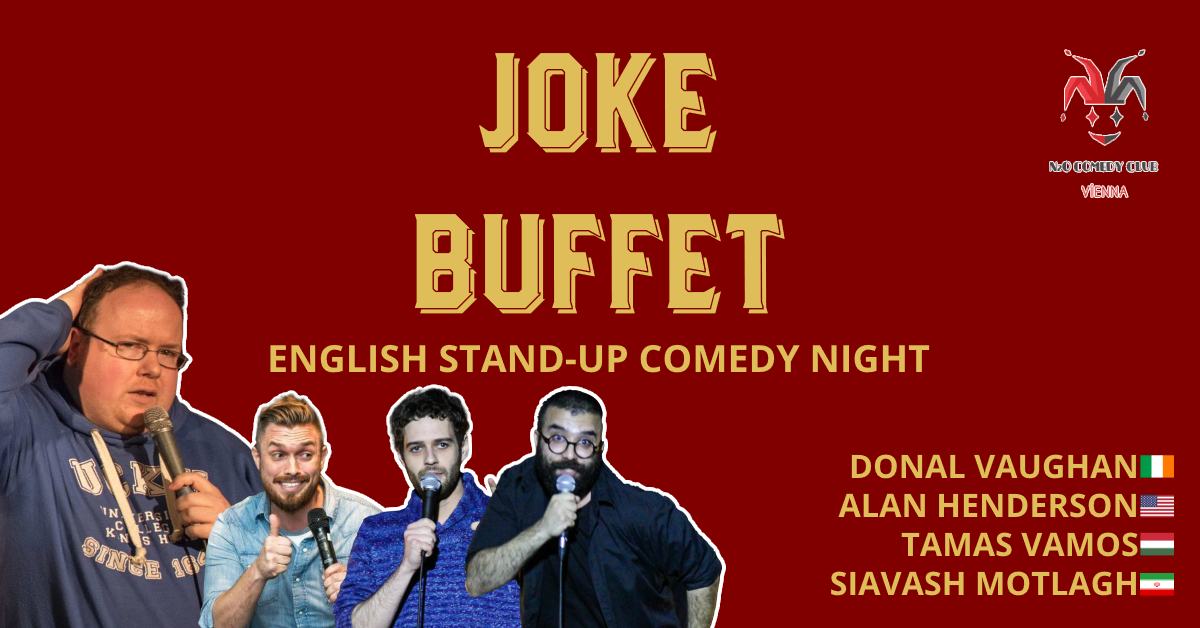 After setting up our international branch in Dublin, Ireland, we are back with an absolutely brilliant line-up to make you laugh till your belly hurts.

4 international comedians including multi-award winning Donal Vaughan will take the stage to make this evening a hilarious one so don’t miss this rare chance to come and enjoy this night with some quality English stand-up comedy and share a laugh with us.

Your comedians for the evening:

Donal Vaughan (Ireland)
Triple-Award winning Irish comedian Donal Vaughan, started comedy in 2012 and hasn’t looked back since. The Dublin-based comic, now based in London has performed in The Stand, Glee, The Frog & Bucket and even the famous Comedy Store. A globe trotting comedian, Donal has done stand up in: Australia, Austria, Canada, Czech Rep, Faroes Islands, Germany, Iceland, Ireland, Netherlands, Slovakia, Spain, Sweden and the UK
Armed with “a distinctive, joke-heavy set with some strongly offbeat lines.” (Chortle), the self-deprecating stand up “owns the stage with his sharp, punchy lines that never fails to hit home.” (Enterainment.ie).
When not making fun of himself, the BSc Zoologist jests about science and the Natural world. “His hilarious and informative takes on science are why he’s a favourite.” Bright Club Dublin. He regularly tours theatres and festivals around the world with his science, comedy children’s show Science Magic.

Alan Henderson (U.S.A.)
Alan Henderson is a born a redneck in Mississippi, and grew up knocking on doors as a Jehovah’s Witness. Possessing confidence that far exceeds his looks, education, talent, and ability, Alan mixes his Southern wit and ignorance to come to terms with growing up in a cult, life in the Southern US and Eastern Europe, fatherhood, and his own failings.
Alan’s dark and risque while altogether lovable storytelling has seen him headline across Europe. He regularly features in clubs throughout Europe. He recently performed his solo hour ‘3rd World American’ at the Edinburgh Fringe Festival to sold out crowds, and headlined shows at the Gilded Balloon. Alan Henderson is also the resident MC of Joke’s On You. Alan hopes to one day own a dog, look decent in sweat pants, and win the lottery.

Tamas Vamos (Hungary)
Tamas is a half Hungarian, half South – African all round great guy who first tried doing stand up comedy in 2014 in Vienna as a “laugh” but having years of experience in improvisation as well as acting in theaters and small movies,he quickly got addicted and fell in love with the stage light (once again).
Since then he became not only a creator but one of the staples of the Vienna comedy scene, he was the in-house comedian of the famous Austrian Wein & Co franchise where he ran his twice a month show “Wein & COmedy – Thirsty for a laugh?” he is the founder of the stand up comedy – theater play the “Jewslim show – when a Jew and a Muslim join forces to make you laugh”. and is currently running his show “Offensively Funny – A safe space for Jokes” twice a month.
Tamas also has a Youtube show called: “Dr.TinderLove – Explaining Men to Women, through Womens Tinder profiles.”
In his free time Tamas is touring the World performing stand-up comedy. Which he has done in over 35 cities spread out in 15 countries and 2 continents!

Siavash Motlagh (Iran)
Siavash is an Iranian Stand-Up comic currently based in Vienna, Austria. Starting his comedy career in Bratislava, Slovakia, he founded Joke’s On You Comedy club which has regularly produced shows across Central Europe.