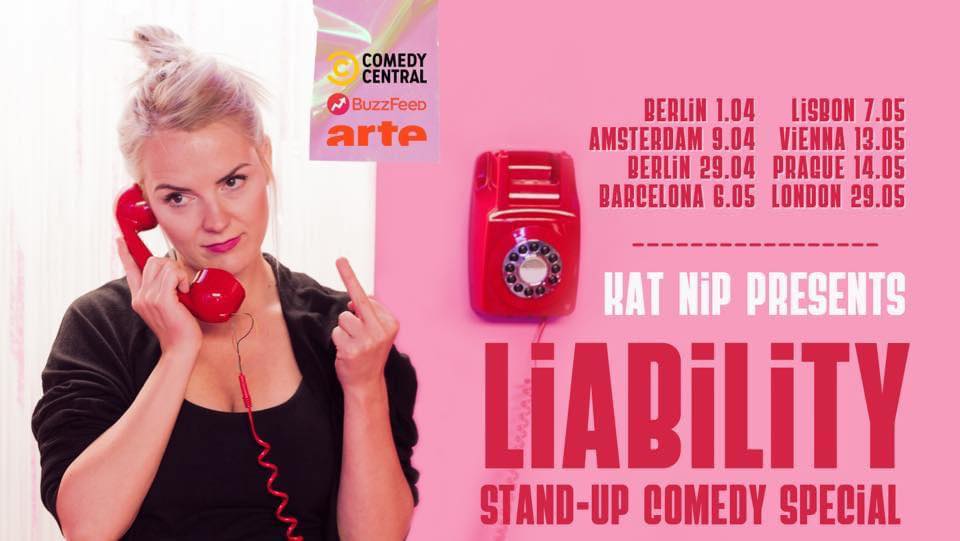 ‘LIABILITY’ (Urban Dictionary) – A person who becomes a hassle and general embarrassment when drunk. However, they are harmless and cause more laughter / stories / material for blackmail than utter humiliation and upset for their minders.

Kat’s solo hour is a rapid-fire comedy special filled with drunken, hungover and occasionally sober stories she is able to recall. She’ll take you on a brutally honest and highly entertaining journey – from her childhood in catholic Poland to living, loving and shagging abroad. You could say it’s an inspirational story of how she’s learning every day how to give less damns. #BLESSED

Kat is a comedian and a catholic-turned-alcoholic from Poland whose main hobbies include alcohol ‘research’, chain-smoking filterless Lucky Strikes and grooming younger, preferably ginger, men.

Kat performed at clubs all around the world; Quatsch Comedy Club Berlin, Cape Town Comedy Club and Bangkok Comedy Club to name a few. She hosts and produces a variety of shows in Berlin with her female collective “Queen Bees Comedy”.
​
She was part of the writing team for Comedy Central DE (“Was ich eigentlich sagen wollte”, 2021), Comedy Central PL (“Mini-Mocks”, 2022), in which she also acted. You might’ve spotted her on ARTE TV and Buzzfeed too!